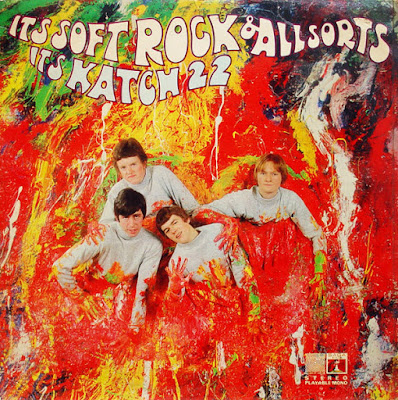 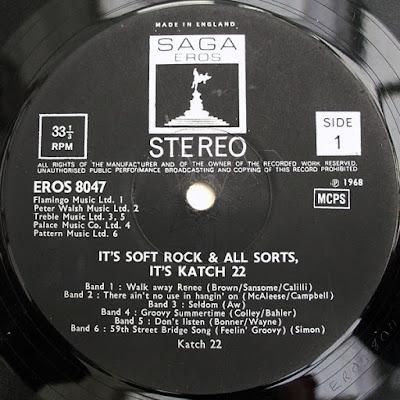 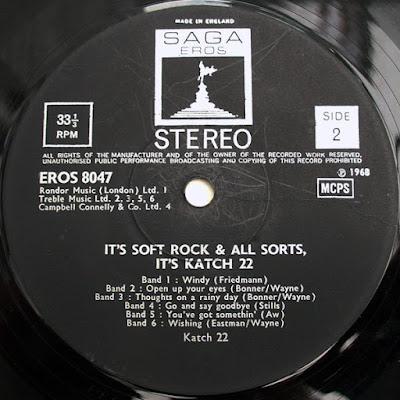 It's mostly Soft Rock with some pleasing harmonies though, let's be honest.

Sleevenotes: "The Katch 22 have built up a tremendous following during 1967 and this album has been produced in appreciation of the great demand from you, their fans, to hear more of this talented young group.

Four of the twelve tracks featured in the album were written by the KATCH, I like "Thoughts On A Rainy Day" for its sweet simplicity, and in contrast, "There Ain't No Use In Hangin' On" which the boys feature in their stage act, is a fantastic 'knee-shaker' full of the tremendous vitality which KATCH fans have come to recognise as being a trade-mark of the group.

The boys have asked me to thank Richard Hartley for helping out on the arrangement. Richard is a member of "Fire", another group handled by TokeNam Aw who produced this brilliant showcase for the KATCH's exceptional talent, and also produces the group's singles.

As KATCH 22's agent and friend, I have been in association with them for quite a while and I'm convinced that they have the elusive star quality which will take them to the top - and where else more appropriate for such a 'KATCHY' group."

As I've mentioned before, Saga were a well-known budget label, perhaps most famed for their cut-price classical LPs and brass band discs rather than the kind of output which really shook the room. Nonetheless, towards the end of the decade they had the idea of booking in a few groups into cheap recording studios, figuring that there was (quite literally) hungry talent out there to be exploited and no real reason why the budget market shouldn't cater for pop music fans as well.

Saga's deals were so threadbare - usually involving a one-off payment for the groups in question and no royalties - that it's hard to imagine why anyone would have put their hat in the ring, however desperate they were. While none of the few pop and rock LPs that slipped out during this brief period are lost classics, they do contain some interesting ideas and a few genuinely stellar songs. "Moonbeams" by the Magic Mixture (recorded in an infant's school hall) is a neat, spacey track which manages to recall Joe Meek and sound like of-the-moment psychedelia simultaneously, and the "Five Day Week Straw People" concept LP is a charmer in general.

Katch 22's LP is perhaps the biggest selling and most unexpected of the bundle. As the sleevenotes suggest, Brixton's Katch 22 - or THE KATCH in block caps, as their agent seemed to wish to refer to them - were a fairly serious proposition at this point, felt by some music critics to be poised for success. What did they want with a budget LP label?

There are two answers to this question. The first is probably "quick and easy access to money" (in other words, the same reason Elton John had dalliances with budget labels later on) and secondly, a long player with a full colour sleeve in the wire racks at Woolworths at a cut-down price, recorded quickly but professionally, probably allowed them more promotion than a few flop 45s in the remainder bin. At a low, low price, there's no doubt this also attracted buyers who wouldn't have touched Katch 22 product on impulse at the full whack.

And what did they get for their money? Well, an LP that's competent and pleasant enough to accompany your tea and toast on a Sunday afternoon, but certainly won't shake your house's foundations. The terribly titled "It's Soft Rock and Allsorts It's Katch 22" (which competes with Giorgio Moroder's "That's Bubblegum, That's Giorgio!" for the Most Sloppy and Literal Album Title Of All Time award) does at least prepare you for what's up ahead. The group are slick, keen, professional musicians who specialise in rich vocal harmonies and tranquil takes on numerous West Coast pop hits.


Mixed in with those are some tracks that come close to rocking. "You've Got Somethin'" is a zinger, as is "Don't Listen" (both previewed below). Their covers, surely included as a guarantee of familiarity to the casual record buyer in Woolies, also wouldn't have shamed any record from this period, but inevitably take no risks with the arrangements.

Overall, this album can be safely filed alongside some of the softer harmony pop and folk rock in your collection. Its cover acts as some eerie warning to the Stone Roses that pissing around with Pollock paint may be visually striking, but it's rather messy - yer man at the rear left is pulling a face to suggest he'd rather have sent a stand-in to the photo session - and the whole thing is as pretty musically as it is visually. It never puts a foot wrong, but never really blows your mind either. At the very least, you can say this release did them absolutely no harm and may have pulled in a few extra bodies to their live shows.

Katch 22 started off as The Midnite Blues and were poached by entrepreneur Tokenam Aw after he saw one of their early shows at the 100 Club. They consisted of Keith Wilford, Martin Wayne, Mike Eastman and Paul Bonner. Following their eventual split in 1970, Bonner and Eastman went on to join the short-lived Paintbox.

Fire, mentioned in your review, were a three-piece from Hounslow who released a dapper track called "Father's Name Is Dad" on Decca in 1968, which got pulled because none other than Paul McCartney loved the track but felt it needed re-recording and embellishing to be a deserved hit, and Decca listened to him. If anything, his actions in getting the single re-released stopped it in its tracks.

thanks Dave, their version of "Groovy Summertime" surpasses the original IMO

Great group, if you love this sound, which I do. They've reunited in this decade and thus far recorded 3 more albums which are available as downloads.