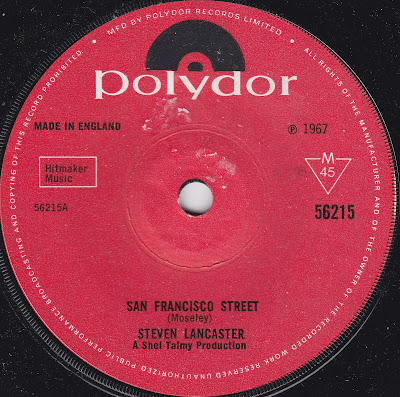 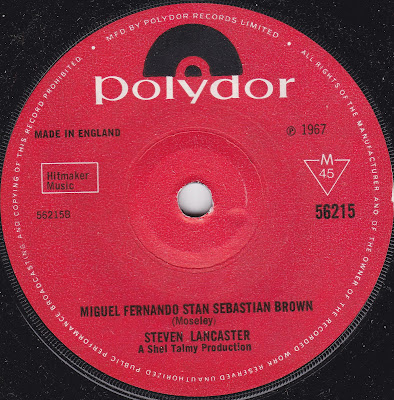 Throughout 1967, San Francisco seemed to be sold to non-residents as a utopian ideal, the peace-loving place of hippies, beatniks, oddballs and the kids of the future. These days, it's an impossibly expensive place to live and a strong city to invest in some prime hillside real-estate. Somewhere in between those two moments, the hippy drug comedown produced a degree of crime, chaos and vagrancy amongst the idealistic thinking. Beware anyone selling you utopia, kids. Eventually, you end up paying for it. Hey, why do you think I can't afford to live in Walthamstow anymore?

Steven Lancaster here - actually songwriter Len Moseley, who later went on to join and write for Wild Silk - was perhaps more philosophically minded about the situation, keen to inform listeners that in fact, San Francisco could be created anywhere, whether you had the money for a plane ticket or an apartment. All you need (besides love) was the will to let it exist and let your own state of mind form that community.

While Moseley had clearly never visited Ilford, it's an optimistic thought that permeates through this dash of popsike convincingly. Shel Talmy was on production duties to give the track his usual masterly oversight, but instead of the usual guitar crunching, feedback and distortion, he opted for a more subdued approach here. The end result is sweet, simple, and completely in keeping with the zeitgeist of the times, but possibly lacking enough of a memorable melody line to enter the Top 40.


Besides writing for Wild Silk, Moseley would later go on to pen the track "The Night Before" for Lee Hazlewood, but beyond that appears not to have continued his career as either as a singer or a songwriter. If anyone knows his whereabouts these days, please do drop me a line.