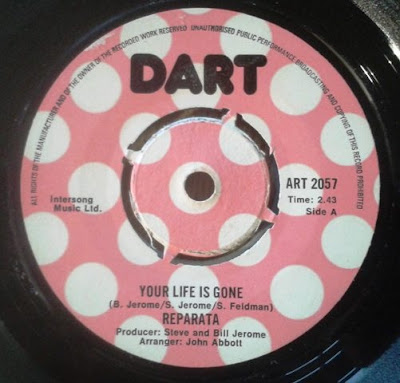 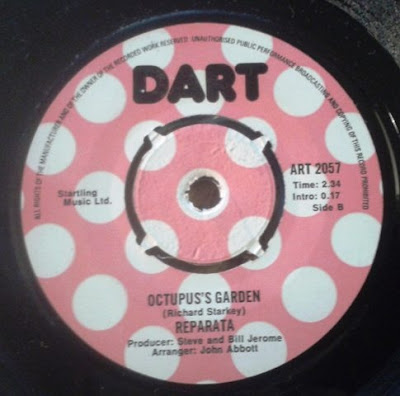 The most OTT death disc ever backed with Starr's finest. You can't lose.

I wrote quite a bit about Reparata, of Reparata and the Delrons fame, in this blog entry where I covered the utterly magnificent "Shoes", which existed like a mongrelised version of girl group pop, glam, and Roxy art-rock. It's one of the finest pop accomplishments of 1975, certainly, and only weird legal issues surrounding its release have prevented it from becoming far better known.

While "Shoes" flopped in 'real' terms, it created enough interest in Reparata's solo career for the small indie D'Art (or Dart, as they now seemed to be known) to reissue some stuff from their vaults in 1976. And what an odd reissue it is too, with it consisting of her Octopus's Garden/ Your Life Is Gone single from 1972 with the sides flipped.

Someone at the label clearly realised that their best shot at following up the art-pop of "Shoes" was the rather ace death disc styled number "Your Life Is Gone" which had previously been hidden under the jolly Beatles cover somewhat like a collection of writhing earthworms under a rock. While it's not an original idea by any means, the track takes the basic premise of "Leader of the Pack" and "Terry" and seriously ups the ante, adding car smash noises and ambulance sirens (and, for some reason, a sitar) to the mix. "Can't go on much longer!" wails Reparata. "Soon they'll have to put me away!", then the sound of crunching metal follows soon afterwards. As OTT as it sounds, the pleading melody is very faithfully and beautifully done. It's the kind of track retro revivalists such as The Pipettes might have turned their attention to in the noughties, had anyone involved in that project wanted to inject some black humour into the proceedings.


By 1972 death discs were considered a nostalgic relic, so there's definitely a sense of nudging and winking going on here, of pushing the template for effect. While it would be a difficult and seemingly insensitive listen for anyone who has recently lost a loved one in a car accident, at a distance from such issues it's a truly wonderful pastiche. Reparata has one of those smoky, gloomy, heartache-infused sixties voices which can handle this kind of melodrama without making it seem too ludicrous - it's a testament to her that she can actually walk hand in hand with the style of the track without once sounding insincere.

The B-side, and previous A-side, "Octopus's Garden", isn't as interesting but is a jolly enough cover of The Beatles track, riddled with sound effects and a music hall styled backing. It sounds like it should have been the flip all along, frankly.

If the previews below are a total car crash, go straight to Box and listen to them there.

Email ThisBlogThis!Share to TwitterShare to FacebookShare to Pinterest
Labels: reparata, seventies, The Beatles