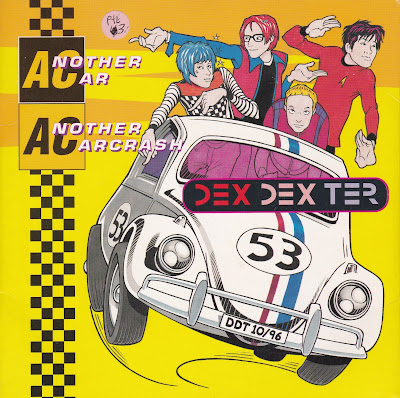 Was there ever a music press hyped scene more mocked than Romo? We could talk about Lionpop if you want, but that really fits under the category of "vague and poorly named ideas which only one person ever mentioned". Romo, on the other hand, was a simple case of bad timing and under-prepared artists. Some of the bands involved, like InAura, would produce material which under the right circumstances may have hit home. The issue was that their travelling companions had barely formed five minutes ago, were still in the process of forging identities of their own, and seemed to have an abundance of confidence which belied the actual material gathered. A romantic modernist reaction against the excessive laddisms of Britpop made complete sense at the time, but many of the acts involved seemed like student performance art revue projects caught halfway through rehearsal time having fully designed the costumes whilst only managing to have written one page of the script. In the end, Britpop died, Pop returned, and that was that. You can't invent the future. Sigue Sigue Sputnik will tell you that.

For a scene so hyped it's also shocking that so few pieces of recorded work slipped out. Orlando were the kings, managing one album and a few singles. InAura had a great album ready which was rejected by EMI, and subsequently issued by an indie two years too late for anybody to notice or care. Boutique were allowed a couple of interesting singles before slipping under the radar.

Dex Dexter were even less noticeable, being given permission to put out this single - with one of the greatest titles for an A side of all time - before being forgotten about almost immediately. The curious thing about the end product is how it sounds more like a late nineties lo-fi British approach to indie than "Romo" per se. Each angular guitar riff, each cheap keyboard drone which sounds rather like Sweep the puppet squeaking in protest, and each novelty car horn noise makes the end product more akin to the Teen C frolics of Bis than any serious new movement. At the risk of using idle comparisons for a second consecutive sentence, it's true to say that the sharpness of early Adam and the Ants is equally apparent, but unlike Orlando or InAura, there's not much in the way of sweeping electronic melodrama going on here. Maybe if Dex Dexter hadn't boarded the Romo bus, they'd have stood a slight chance in the indie world outside.

Their demise seemed extremely swift. I was introduced to the lead singer Seb at the Water Rats in Kings Cross mere months after this single was issued, and asked him what they had planned next. "You know as much as I do," he grumbled, his flamboyant persona dropping almost immediately. There were to be no more releases, but if you want to put the expectations of some music critics into perspective, go away and read Taylor Parkes' review of a Dex Dexter live gig here. Seldom has hyperbole been less justified, but hopefully enough time has passed now for the single to be enjoyed for what it is without any weight of expectation attached.

Xavior played Pearl in Velvet Goldmine and recorded a solo album "Chainsaw Mass Appeal" for Dex's old label Island Records. They dropped him and it was never released but you can hear two songs here: https://www.youtube.com/watch?v=tEJgXebTRuY . During 1999-2004 he played keyboards for Placebo, produced for various people and recorded another four solo albums - "Xavior" (very funk-orinetated), "Nu York Dreams", "There Is No Such Thing As Silence (electro-acoustic project) and "Man Of Melancholy" (vocal/piano) none of which were released either. He went on tour with the Man of Melancholy songs in 2005 supporting David Ryder Prangley And The Witches (led by David RP ex of Rachel Stamp) and in 2006-2008 he did a new high-camp band Paul St Paul And The Apostles with DRP on bass and some transvestive stage dancers. After that he quit making pop and found a lucrative new career as a dining room pianist commanding a fee of £450 a gig. He has played Elton John's wedding and events by Kevin Spacey and others and for some years right up to the present has had a Sat/Sun lunchtime residency at Bistroteque in Bethnal Green, London. I saw him there myself only yesterday (Sat 6 April 2019.)