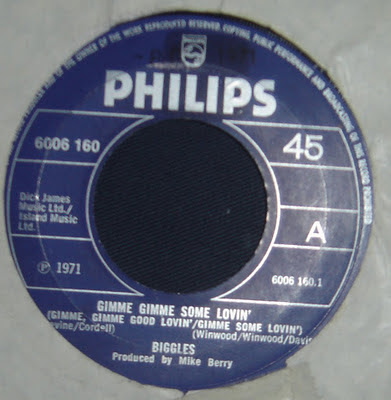 Given that I didn't have any Christmas records to upload this year, I thought I couldn't just leave you all disappointed without any party tracks before present opening day (because of course, this blog has been soundtracking everyone's house parties for years now). So here's one.

"Gimme Gimme Some Lovin'" is nothing more or less than a glam rock medley combining the Transatlantic bubblegum hit "Gimme Gimme Good Lovin'" with the Spencer Davis Group's "Gimme Some Lovin'". Whooping, cheering and "Barbara Ann" styled party noises are worked into the mix to create something which sounds like the biggest rave-up since I heard "Gimme Hope Joanna" being played by a band in a pub in East London one summer to an assortment of booze-added cockneys. You don't hear the like very often. There's a thudding glam beat backing all this as well, which adds an extra layer of rowdiness, and in all whilst nobody could pretend this is a particularly sophisticated piece of work, it sounds bloody fantastic if you've had enough beer on a cold winter evening.

Biggles were essentially a studio based group created by one Mike Berry, who worked as a music industry mover and shaker for many years for both Sparta Music and The Beatles' publishing arm of Apple. It's probably safe to say that when this record flopped, no follow-ups were attempted under this name. You can read more about Berry's career on the Mersey Beat website.

This record also featured on the marvellous Purepop blog some years ago, where the author Robin Wills has done a fantastic amount of Mike Berry related trawling over the years. In fact, when I made the schoolboy error of mistaking this Mike Berry with the Joe Meek/ "Are You Being Served" Mikester awhile ago, he was quick to spot my on-blog mistake and contact me.