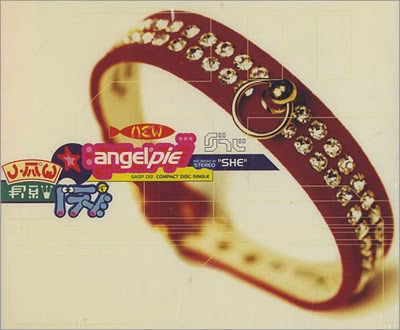 A slightly unusual upload, this one, in that it's a promo cassette rather than a piece of vinyl - hence the picture above bears no relation at all to what I have in front of me, which is simply a rather blank looking cassette thrown into a plain company case with the details printed on white card.  It is of bugger all value, but... let's not let that get in the way of the track itself, which slipped out almost completely unnoticed in the early nineties.

"She", far from being a cover of the Charles Aznavour classic, is a unique slice of ambient pop which oozes both class and atmosphere, from the slightly ominous chiming opening to the hushed vocals (delivered by Marina Van-Rooy) right down to the rather toytown psychedelic lyrics.  It sounds like an epic sixties orchestral belter turned inside out, with the peaks replaced by smooth, delicate ambient troughs - sound effects burble in and out of the mix, almost taking priority over the music at the tail end, and the strings are so subtle you might not necessarily notice they've arrived until a few seconds after they begin, drowning as they are in the audio soup and heavy bass the rest of the record offers.  Whilst the melody is very simplistic and delivered with breathy, girlish vocals, the record itself has so much going on that, despite owning it for many years, I've never really lost interest in it.  That it wasn't a hit shouldn't be very surprising, though - on the one occasion I heard it on daytime Radio One the DJ playing it simply sounded baffled as soon as the song ended, unsure of how to deliver his next link.  A promo video is on YouTube, but it's safe to say that it probably didn't get much in the way of MTV attention at the time either.

According to the information I have in front of me, Angel Pie were supposed to have had an album called "Jake" out, but I've never seen a copy anywhere and can only assume that it remains locked away in the vaults.  Their debut single "Tin Foil Valley" was more akin to snappy, Saint Etienne styled pop but did little business, and a third single "Tipsy Q Horses" appears to have been slated for release, but so far as I can see never materialised.  If my memory is correct the band were Liverpool-based and involved the producer Mark Saunders as a key member, but that's as much detail as I can recall.

More information on the band would be appreciated, most especially what happened to their album (which, believe it or not, I was actually looking forward to) and what they're up to now.

(This blog entry was originally uploaded in February 2011 - and nope, nobody ever did get back in touch to tell me what became of the album. If you know more, I'd love to hear from you).