Herbie's People - You Thrill Me To Pieces/ Sweet and Tender Romance 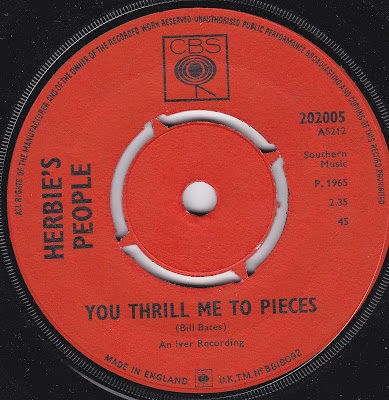 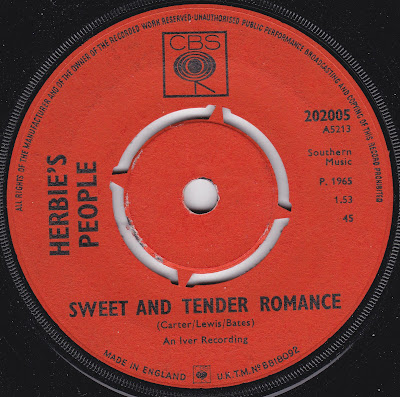 Formed in Bilston as Danny Cannon and The Ramrods in 1959 then going through a couple of minor line-up changes before becoming Herbie's People, this lot were a highly versatile live act in the Midlands area. Consisting of Len Beddow on lead guitar and vocals, Alan Lacey on drums, Herbie on lead vocals, Mick Taylor on guitar and vocals and Peter Walton on bass, they moved on from raw Buddy Holly styled rock and roll to diversify their style enormously to take on harmony pop and electric organ dominated melodies.

The band were apparently a powerful live force and seemed like an obvious shoe-in for the charts so far as their management and (presumably) CBS were concerned, but were dogged by bad luck. At one point they planned to release "Semi Detached Suburban Mr James" as a single but were beaten to the punch by Manfred Mann, who scored a hit with it instead (though Herbie's People's version was granted a US release).

"You Thrill Me To Pieces" was also unlucky not to have been a hit and seemed dangerously close to becoming one after a lot of radio and TV exposure. It apparently appeared in some chart company's Top Forties, but not in the official run-down, and as such is technically a flop so far as the powers that Beeb are concerned. It's light, frothy, twangy and harmonic, and listen hard enough and you can just about hear the huge raft of influences the band had accumulated.

I far prefer the B-side "Sweet and Tender Romance", though, which is so enjoyed by all popsike aficionados that it's available to buy through all the usual mp3 outlets (though you can listen to it on YouTube here). There's an droning, organ driven wooziness to "Romance" and steady climbing melody which makes you think that the band must have found moving with the times to absorb psychedelic influences to be a total breeze. And you'd be right - when Pete Walton left the group in 1968 they changed the group name to Just William and recorded the much-compiled and really very pleasing "Cherrywood Green" for Spark.

That was by no means the end for Herbie's People, though. They reformed countless times to gig again on the Midlands circuit, but finally decided to throw in the towel, apparently for good, in November 2011. As we all live in times where bands get back together for one final hurrah on multiple occasions, though, who can say for sure?

To me, the best song by them is the B-side to Semi-detached...., entitled, "Residential Area".
https://www.youtube.com/watch?v=oTFxak4gbA8

My dad is Len from the band. They actually recorded Semi Detached.. before Manfred Mann and had it taken away from them. The band didn't know about the US release until I chanced upon a copy in the early 90s! They also recorded a great version of the song Thank You For Loving Me but the Ivy League kept it for themselves. A similar thing happened with another song Herbie's People were given called Let's Go To San Francisco.....

My dad is Len from the band. They actually recorded Semi Detached.. before Manfred Mann and had it taken away from them. The band didn't know about the US release until I chanced upon a copy in the early 90s! They also recorded a great version of the song Thank You For Loving Me but the Ivy League kept it for themselves. A similar thing happened with another song Herbie's People were given called Let's Go To San Francisco.....