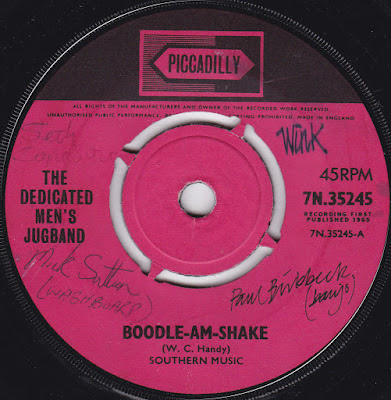 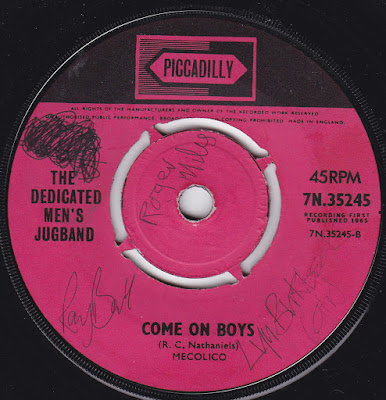 If there's one thing nobody's bothered to write a sixties article about (so far as I know) it's the incredible volume of jugbands who made themselves known throughout the decade. You would have thought that in an era of rapidly changing recording studio technology and ever-evolving sounds, the sixties would have been very keen to shake them off - but no. Even in the late sixties The Purple Gang were deemed strange counter-culture heroes, and at the turn of the seventies Mungo Jerry's sound owed a debt to the movement.

Verifiable facts about the Dedicated Men's Jugband are hard to come by, but they had two releases out on the Pye subsidiary label Piccadilly, this and the follow-up "Don't Come Knocking". We also know (from the signed copy of this very 45 alone) that they consisted of Seth Copeland, Mick Sutton, Paul Birkbeck, Wink, Ray Butt (?), Lyn Birkbeck and Roger Mills, and they somehow were lucky enough to get a promo film made for themselves by Pathe.

Copies of their records are thin enough on the ground to suggest that they sold poorly at the time, but "Boodle-Am-Shake" is a real tonic - a preposterous, speedy little ditty which belts along at such a pace it's almost hard to keep up with it. You can understand why Pye took a gamble on them, despite them possibly seeming like a rather unlikely prospect.

The only single by the band, superb

Couple of things - I always thought the jug player was Seth COPAS but maybe not? Mick Sutton's brother John was the drummer in the Downliners Sect. I've still got a photo of them but hadn't heard anything by them since the 1960s when I remember especially Boodle am Shake.