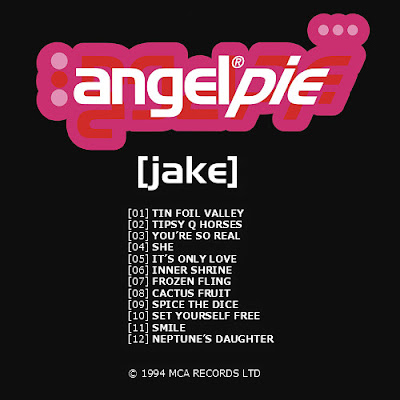 Back in January 1994, a basic four-track LP preview promo cassette with a cheaply printed text only inlay fell into my student inbox at university. Nothing unusual about that. I regularly wrote music reviews for the student newspaper, and while our readership was tiny, it still reached a local youth audience record labels were often keen to tap into, especially if our town was on a proposed tour map for any of the groups on their roster.

What was unusual was the fact that I hadn't heard of the group "Angel Pie" this cassette was promoting, who appeared to be a joint project between "dance diva" Marina Van Rooy and producer Mark Saunders with unknown others. Back in those days I was usually very quick to spot new acts, especially if they had signed a significant record deal, but this lot rang no bells at all. Not expecting much, and deeming them to be some kind of A&R rep's afterthought, I left the cassette on my "to do" pile for a couple of days before putting it in my cheap Saisho combi stereo and pressing play.

I loved what I heard immediately, from their previous 1993 single "Tin Foil Valley" (which I had neither heard nor heard of) and its cheery but jittery electronic fizz, to the other three tracks "She", "Tipsy Q Horses" and "Frozen Fling". All made me convinced I might have just been sent a demo preview of one of my favourite LPs of the year. "She", in particular, was a much-favoured play of mine throughout 1994, and I wrote about it in much more depth over here.

Problematically for the group, their first two singles "Tin Foil Valley" and "She" sold poorly, and MCA appeared to get the bum's rush after that and failed to issue more of their records, including the album. I waited for news of the LP's release, but none was forthcoming. MCA's press office only had the comment "Ooh, dunno about that one, I'm afraid" to offer. By the time 1995 rolled around, I'd given up all hope of ever hearing it.

Behold the brilliance of the Internet, then, because a week or so ago I was contacted by Dustin Rainwater who had read my blog entry about "She" and said that he had been sent an incomplete version of the album (with only two tracks missing rather than eight) a while ago. He asked if I would like a copy, and I fired off a positive response as soon as I had receipt of his email.

My first cautionary observation would be that I've actually waited to hear this LP for longer than I've waited for a third Stone Roses album to emerge. I've also gone from being a confused first year student at university to having a job in the civil service, so my "head" isn't in quite the same place, and nor, I suspect, is anyone else's. Blairism has come and gone in that time, babies born in 1994 have grown up and begun professional careers, and Coco Pops have changed their name to Coco Krispies and back again. It's been a long journey for us all.

"Jake" has to be put into some sort of context, then, and I suspect one of the reasons the four track demo made such an immediate impact on me was that, amidst of sea of dodgy grunge bands and industrial chancers, it actually harked back to the only recently dead indie-dance days. Marina Van Rooy's vocals are blissed and seductive, synths bubble and chime away optimistically, and guitars rumble and scrape away quite low in the mix, giving the tracks a slightly harder, more alternative edge.

"She" still sounds unspeakably wonderful, and remains one of my favourite singles of 1994. Pitched somewhere between the background ambient atmospherics of Depeche Mode's "Somebody", a psychedelically inclined easy listening track, Saint Etienne's "Avenue" and the forthcoming trip-hop explosion, it's almost impossibly rich with detail, an enchanted garden of a track.

Other tracks like the aforementioned "Tin Foil Valley" and "Tipsy Q Horses" echo the child-like, giddy optimism of the early nineties rave period, while marrying those ideas to twittering and atmospheric pop structures. Problematically, though, it makes "Jake" - or what we have of it so far - an easier piece of work to digest in bite-sized chunks rather than to listen to as a whole. With the exception of "She", it's one long breezy, sugary high. While Van Rooy's pie-eyed vocals and child-like cotton candy observations and dayglo nineties New Age ideas are charming at first, they steadily begin to pall when you're in their company for longer than twenty minutes. If the two missing tracks "Cactus Fruit" and "Set Yourself Free" are ambient interludes of some kind or slower numbers, that would make absolute sense and would break up the sherbet flavoured fizziness of this LP somewhat - but unless someone comes forward with those (and Dustin and I are very keen to hear them if you have them) we'll never know.

Still, "Jake" is definitely a good and often incredibly inventive and well-crafted LP which would have fared much better in the British music scene a couple of years before, and possibly in more capable hands than MCA's. I wouldn't hesitate to regard it as being a lost indie-dance gem in the same breath as numerous other lauded but badly selling records at the back end of that period, with the crucial difference being that it was never even released. It's a real privilege to finally hear most of it, and thanks so much for Dustin for making it available.

If you were involved in the "group" in any way and want me to remove this LP for free download, get in touch and let me know. More than that, however, if you have sound file copies of those missing tracks "Cactus Fruit" and "Set Yourself Free", please assuage my curiosity.

Dustin also sent me an unreleased Angel Pie track "Wendy House", which I've included in the download bundle. I'm not too sure what the intentions for this were, but I'm going to assume it was an unreleased B-side or demo for a planned piece of future work.

Oh my, I've been looking for this since Tin foil Valley.

you don't happen to have Germ Free by Superior do you?

Hi I remeber them well, did a photo shoot with them at PARR St studios, Angel Pie, think they had just formed, it was for a local music magazine called Groove. Nice people, hit to know them quite well, nice to hear the songs again think the mag had the same demo you had, where are they now, would love to know,