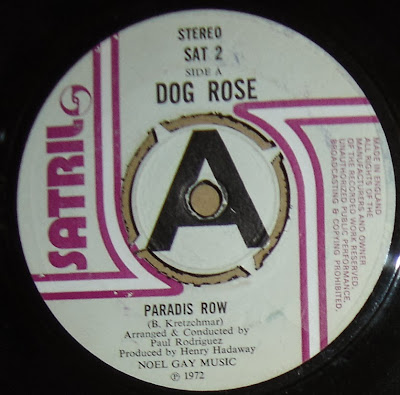 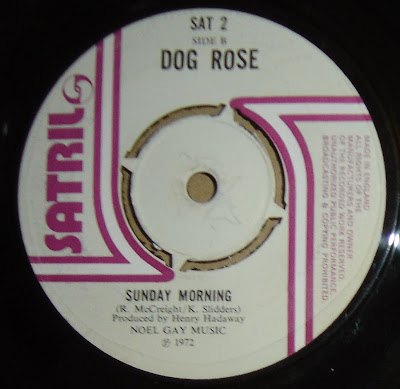 Well, this is a thorny mess.  Nobody can seem to agree on the band line-up for this recording at all.  The press release Satril Records put out for this single quotes entirely different personnel to the members eventually listed on their solitary 1972 LP release "All For The Love Of", and the only reasonable explanation is that as soon as this group imploded, the label quickly hired another bunch of musicians together to carry on under the Dog Rose name.  It's also possible that the name was owned by the label and musicians were hired for songs accordingly until a hit came.

Confusion aside, "Paradis Row" occupies the same area as a great many early seventies pop singles, with a tiny drop of popsike in its veins, some anthemic McCartneyesque melancholy (the same strand inhabited by the theme to "Whatever Happened To The Likely Lads?") and a streak of Edison Lighthouse bubblegum.  Gently slapped bongos introduce swaggering riffs and beatnik-styled lyrical patter, and this eventually cascades into a huge rainbow streak of a chorus.  Regardless of who may or may not have been responsible for this, it's a bit of a buried gem, a could-have-been that never was.

The flip is much  more bizarre.  The press release describes it as "back to the fifties and rocking and rollin' down the avenue", but the jaunty pub piano, distortion and treble seem to be recalling The Kinks if anyone else.  Virtually absent of bass and overloaded with top-end screech, Graham Coxon would probably nod in approval at the lo-fi approach on offer here, though God knows what anyone made of it at the time.

If you were in any line-up of Dog Rose at any particular point and want to conclusively clear up a mystery here, please do get in touch.

the first song Paradis Row can't be downloaded or played.

I had no problem playing or downloading either song. However, for me, usually one song or the other won't play when I first go to view the newest post. The solution is to right-click the song that won't play or download and select "Reload frame". That has always solved the problem for me. (I'm using Firefox. Other browsers may behave differently.)

As always, thanks for the post. Your research and commentary on these singles are always magnificent.

And yes, unfortunately the mp3s are hosted by a third party (Box) who regularly run updates, the latest of which I find a bit temperamental (and less pleasing than their last version design-wise - God knows why they've sold it as an "improvement"). I sometimes find that when I first land on the page they "freeze" and don't load properly, but a quick refresh usually solves things.

A message to all web developers out there: I know you have to justify your day-jobs, but if something works well AND looks nice as it is, please don't screw about with it. Please. Or at least offer your users the option to revert to the old version.

Apparently not for this single, which the Dog Rose you've quoted above cannot remember being involved with. So this, the debut, was recorded by an entirely different line-up for reasons we're not sure about.