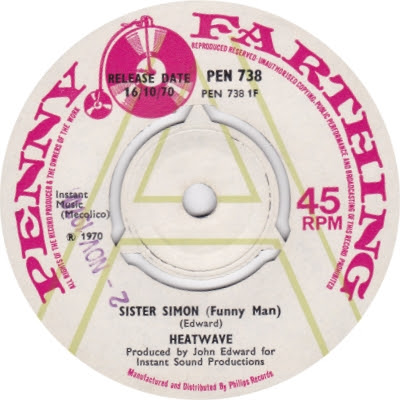 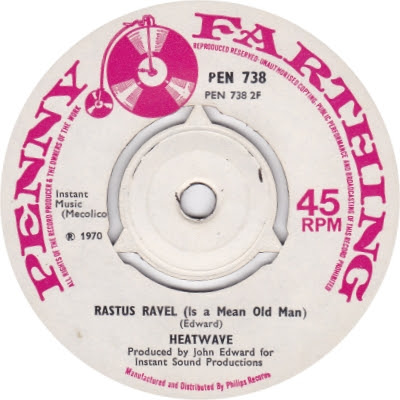 The "Left and to the Back" mailbag - or email account, to be less pretentious about it - received another surprise a couple of months ago, when Martin Samuel, the drummer (and occasional fire-eater) in sixties group Heatwave, got in touch about this single.

Heatwave were formed in 1969 as soon as Samuel joined the pre-existing group The Moving Targets to become their new drummer. Otherwise consisting of John Fellows on bass and vocals, Terry Shea on rhythm guitar and vocals, and Richard Steen on lead guitar and vocals, they became renowned on the gig circuit for their strong vocal harmonies. Some plum support slots were gained, including ones with Consortium, Love Sculpture and Spooky Tooth.

Despite these successes, their agent John Edwards felt that they lacked a strong enough frontman, and  vocalist Peter Allatt was recruited. This period of their career lead to prominent radio sessions for Kenny Everett and DLT among others, and this single which was recorded in Pye Studios in 1970. The A-side is a chirpy pop tune which is naggingly catchy, but it's failure is probably explained by the fact that despite the hooks and the breezy arrangement, it arguably wouldn't have stood out enough among the pop pile of the day.

The flipside is where the action really is. "Rastus Revel" was created around a funky riff Samuel helped to create, and has started to become acknowledged among retro DJs as the one to zoom in on. Wah-wah guitars combine with a slinky groove to create a cool, mean number. Rick Wakeman played piano on the recording and The Ladybirds (Maggie Stredder, Gloria George and Marian Davis) provided the sultry backing vocals.


This was their only single, and Samuel parted company with the group not long afterwards, going on to join The Crew who we've already covered on this blog. The rest of the band would go on to become Sensations, Peters World, then finally The Sensation, never quite scoring a hit in the process.

Thanks to Martin Samuel for getting in touch and offering us these two gems. You can read much more about Heatwave over on this website.

Again, thank you so much David

kudos for posting a single that evaded the bubblegum mf compilers

How funny... he also got in touch with me, and I posted a related 45 at the World's Worst Records!
https://worldsworstrecords.blogspot.com/2019/02/baby-baby-baby-baby.html

I noticed that, Darryl! And why not, I suppose.