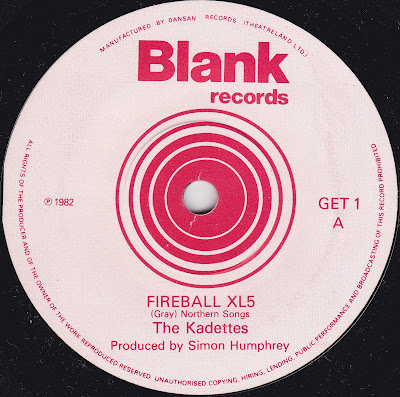 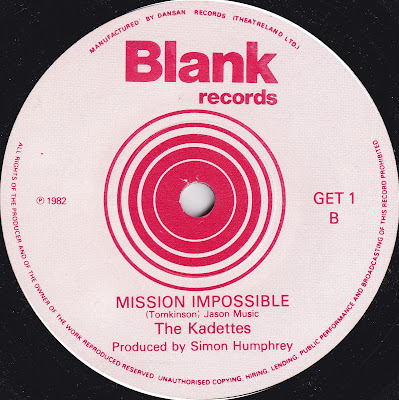 Back in their days as a relatively unknown live outfit, XTC used to try to excite provincial crowds who were unfamiliar with their material with unexpected covers. "All Along The Watchtower" made it on to their debut LP "White Music". Their peppy cover of "Fireball XL5", on the other hand, went nowhere, languishing in the vaults until their "Coat of Many Cupboards" box set unveiled it in 2002 (mixing it together with a pretty mean dub version). While the band weren't happy with the studio version, it's possible they also sensed it might be a bit too gimmicky for an up-and-coming group during those somewhat judgemental times.

A few years later, this little 45 was released by the rather anonymous Kadettes, and placed the tune in the rightful lap of a studio project who were unafraid of the project's novelty value. The early eighties were surely the right time to revamp the track as well. Barry Andrews' squeaky keyboards on XTC's version made it seem like sixties pastiche, whereas this remodels the track as a piece of sleek, futuristic disco - or at least, it sounded pretty damn modern at the time.

Regrettably, the flip "Mission Impossible" isn't actually a synthpop cover of the theme from that programme - though I'm not too sure how that would have worked. It's an original composition which  is perfectly listenable but overshadowed by the ginormous hooks on offer over on the A-side.


The producer Simon Humphrey was involved in this record, who was previously one of the prime movers in the pseudo-New Romantic outfit The Techno Twins, but besides that he also worked with Secret Affair, The Jags, The Vibrators, The Drones, The Farmer's Boys and, most surprisingly and probably most successfully, Malandra Burrows off "Emmerdale Farm". I wouldn't be surprised if The Kadettes were just a studio group he pulled together for the purposes of making this record. Somebody had to do it.

A superb version of Fireball XL5, thanks for sharing!