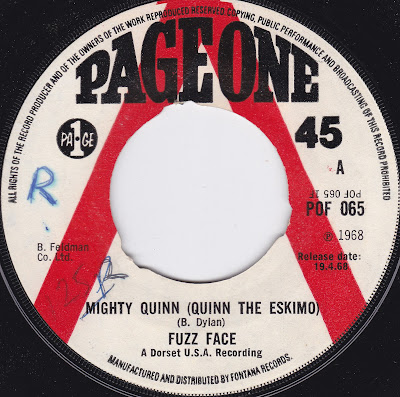 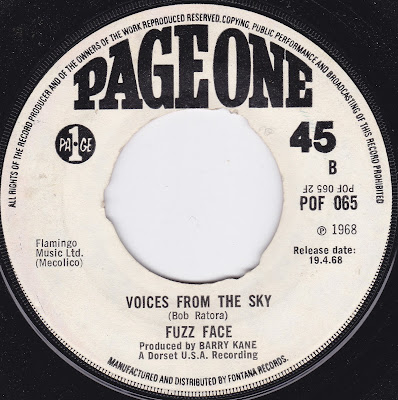 Anything I write about the progression of "Mighty Quinn (Quinn The Eskimo)" from a "Great White Wonder" Dylan bootleg track to a major hit for Manfed Mann is probably going to be a bit of a waste of energy - everyone knows the story, after all. Dylan's songbook was continually plundered throughout the late sixties (and indeed beyond) by bands desperate for both cred and hits, and the adventures of Quinn the Eskimo were possibly the poppiest of options on offer, as well as handily buried on an unofficial release.

While Manfred Mann had shot to number one with their version of the track by February 1968, Fuzz Face here - who I'm 99.9% confident were some sort of American studio group - were latecomers to the party, issuing their version in April of that year. In fairness, it puts a slightly different spin on things, loading an instrumental version of the track with guitar effects, sitars, organs and decidedly "groovy" backing rhythms, making it prime fodder for anyone's house party. You can dance to this with much greater ease than the Mann's rather stompier take.

Commercially, though, there wasn't much room in the charts for two versions of the same song at roughly the same time, and this sank on both sides of the pond. A shame, but it wasn't at all unusual for instrumental versions of pop hits to do this, however innovative or otherwise faintly psychedelic they were.


The producer of this record, Barry Kane, was a member of The New Christy Minstrels who also later worked on other singles with Dr West's Medicine Show and Junk Band and had previously worked with Barry McGuire.

I'm back after an operation on my back

Great to find on your blog this single, very hard to find !!

I'm sorry to hear you've been in the wars, Albert, but it's lovely to see you return! Hope your recovery from the operation is going well.

Thank you David for your support