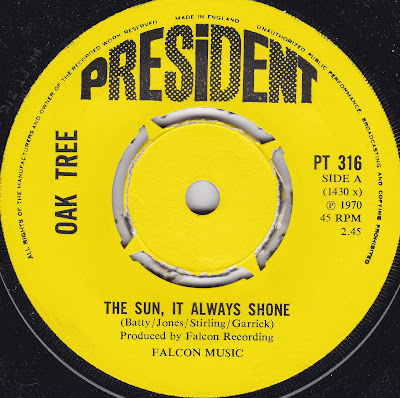 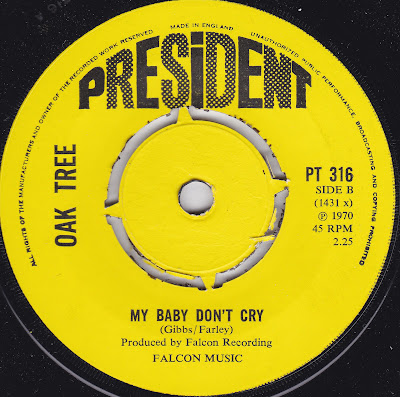 President has had a long and unusual history. Starting as one of the first big independent labels in 1966 and continuing to the present day, it had very early success with The Equals. From that point, it took on all manner of styles, groups and genres, from soul to psychedelia and reggae, and even had a late flush of cult hipster success with Robots In Disguise in the noughties.

Its release schedules throw up all manner of one-off artists and flops, making it a fascinating company for collectors, and Oak Tree were one of many. The A-side here is a huge, epic tune which brings to mind Father Dick Byrne singing his heart out on a Song For Ireland. Most listeners will probably get more joy out of the B-side, which is a Gene Pitney-esque, swinging ballad with a certain rawness in its bones. Once again, this is one to flip the sides for.


Sadly, the identity of Oak Tree is unknown, as is the identity of the songwriter "Gibbs" referred to on the flipside (I had hoped it was a typo and this record had some kind of Gibb Brothers involvement). We'll have to throw this one over to the public for more help.

If the preview files are not displaying properly below, access the files directly here.