Reupload - Blue U - I've Been Lonely For So Long/ Melinda Marie 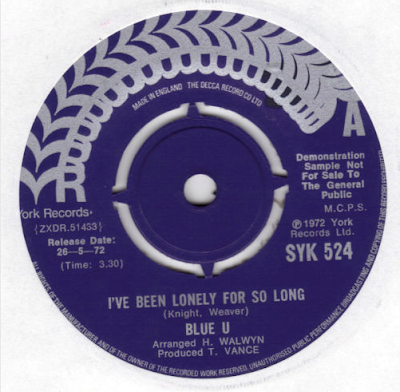 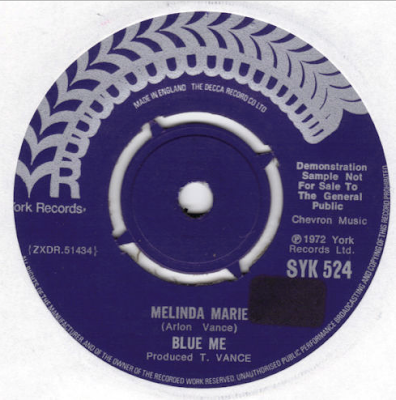 Radio One Rock Jockey Tommy Vance was, by all accounts, a thoroughly decent and rather self-effacing chap who was to Rock (with a capital "R") and the New Wave of British Heavy Metal what John Peel was to indie bands. If you weren't one of the underweight floppy fringed kids in the corner of the student refectory listening to the latest Close Lobsters cassette on your Walkman, and instead chose to perch your more significant arse among the fluffy bearded boys who always carried guitars everywhere, chances are Vance's evening rock show was an important part of your week.

Nonetheless, metallers are a notoriously ungrateful bunch - ask any non-metaller who has ever been booked to support a Heavy Metal band by mistake - who adore their beery hijinks. Apocrypha has it that at the Donington Monsters of Rock Festival back in the eighties, Vance asked the audience to all chant "Tommy Vance Friday Rock Show!" to supply him with an impressive sounding jingle. True to form, the ungrateful bastards instead all yelled in unison "Tommy Vance is a wanker!" and the recording was deemed unsuitable for broadcast.

God alone knows what they would have made of this single. The A-side was produced by Vance but seems rather Vance-free in terms of the performance - it's a fairly straight piece of soul-inspired pop which is sprightly but unlikely to get reassessed by a club DJ anytime soon.

The B-side, on the other hand, is Vance overload. Accompanied by ambient aircraft noises and pretty much nothing else, our man Tommy sings a simplistic song-poem about the mysterious Melinda Marie, who is leaving him on a plane eight miles high. His voice sounds sleepy, tranquil, faintly under the influence (though I doubt he actually was) and altogether lacking the usual gruff Man-in-Denim tones for which he would become famous. It was doubtless a studio afterthought, a quickie recording job to give the single a B-side, but it's a strangely fascinating piece of work, both due to the person involved and also a certain amount of prescience on its part. After all, spin forward to the eighties and Jane's acapella effort "It's A Fine Day" and you have a record cut from a rather similar cloth. Nobody has yet taken Vance's effort here and turned it into a dance track, but I suspect it's only a matter of time.


In any case, this was not Vance's last unusual appearance, or even last ambient appearance, on vinyl. One of his Radio One jingles featuring him growling "Rock radio - into the nineties and beyond!" was sampled on the KLF's classic LP "Chill Out" on the logically titled segment "Rock Radio Into The Nineties And Beyond", a key element in the final moments of that record.

Vance also apparently recorded and released records under various guises in the sixties and seventies, at one point confessing that there may be as many as "twelve" out there. The only ones that are clearly credited to him in some respect are "Melinda Marie" and the two sixties singles he released on Columbia, "You Must Be The One" and "Off The Hook".

His broadcasting career continued until his death from a stroke in 2005, and in later years his most repeated television appearance was on an episode of Chris Morris's "Brasseye" where he was convinced to contribute to a bogus crime rehabilitation video. To his credit, he was one of the few duped participants to speak highly of Morris after the broadcast and defend his right to ridicule the media and celebrities - and it did also cause British comedy fans of a certain age to use the phrase "foaming nut brown ale" rather too often when ordering drinks in pubs. You can tell he's having far too much of a good time reading out the words Morris has given him, meaning that if he wasn't in on the joke, he was at the very least faintly aware of how silly the situation was.

If anyone is able to "out" Vance's other vinyl appearances under pseudonyms, you'll be able to make a lot of collectors very happy.

If the previews below fail to load correctly, please access the files directly here.