The Silvers - Where Has Love Gone/ She's My Woman 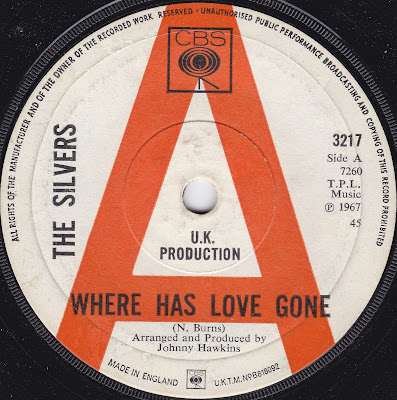 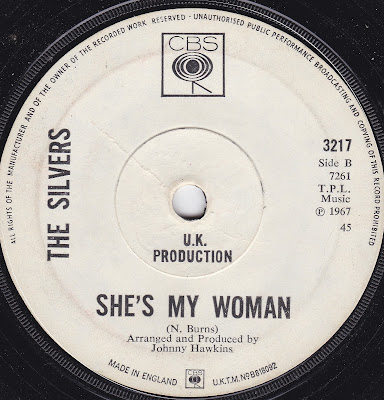 The Silvers were one of the more luckless but persistent pop groups of the mid to late sixties, issuing three 45s which sold so poorly that copies are pure bitches to find (if you'll pardon the language this early on in 2020). Their 1966 Polydor debut "What A Way To Start The Day" (b/w "Blue Blue Eyes") is barely ever seen in record racks, and their follow-up on the same label, "The Trouble" (b/w "Almost In Love") managed to chart inside Radio London's payola-driven Top 40 in 1967, but turns up for sale just as infrequently.

Less obscure, but still not exactly cramming the record racks of Music and Video Exchange, is their final single - this time on CBS - "Where Has Love Gone". If it's anything to go by, it suggests that their earlier records might be worth checking out. The A-side is carefully arranged solemn, wintery baroque pop which gets prettier and more entrancing with each play. The group's vocal harmonies are fantastic and do much to complement Hawkins' careful orchestral arrangements. By January 1968 it might have seemed slightly dated and probably not sufficiently catchy or upbeat for radio, which is a pity.

The flip is uncharacteristically popsike in its stylings too, beginning with what sounds like the master tape being reactivated after an unexpected power cut, before getting all groovy on our asses. It's careful and a little bit buttoned-up, but it nonetheless shows the group could let their hair down when required.


Sadly, I can find absolutely no clues about who The Silvers were. "Tapestry of Delights" gives up, stating "nothing is known of their origins", and the usual web sources are equally silent. The 45cat website features a picture of three toothy, suited-up lads beaming with pride, but there's no reference to their names. With a bit of luck, perhaps one of them will see this blog entry and come forward.

Sorry about the pops and crackles on my copy of this. It's not a perfect, but hopefully it's still good enough for you to appreciate the music.

Email ThisBlogThis!Share to TwitterShare to FacebookShare to Pinterest
Labels: sixties, The Silvers