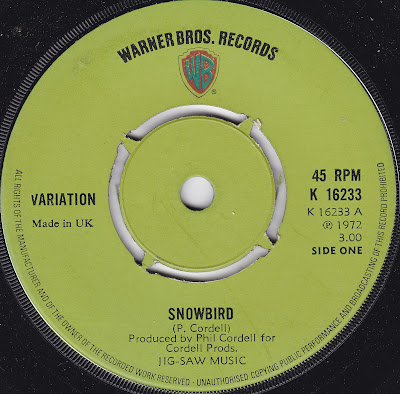 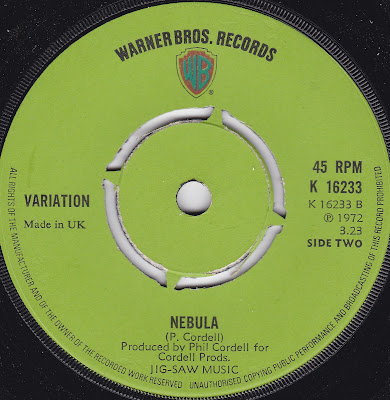 One of the big surprise hits of 1971 was Springwater's "I Will Return", a guitar instrumental released when the charts weren't exactly chock full of them. The days of the music press having a "Best Instrumental Group" category in their reader's polls had long passed, and the idea of a group having a lead guitarist out front, not singing but Hank Marvinning to his heart's content, was passé to say the least. Springwater, however, bucked the trend and reached the top five in November of that year after a slow trudge up the charts.

Springwater were somewhat different to the usual format in that all the instruments on their recordings were played by one man, Phil Cordell. It proved to be a complete one-off success, though, and other singles released by "them" - including a somewhat unexpected cover of "Jerusalem" - flopped. Given that, it's a slight surprise to find this was also written, recorded and released by Phil Cordell in 1972, only under the name Variation. Issued in January 1973 mere moments after the Springwater name had been abandoned, it doesn't really offer any progression on the formula and is really just more of the same; quite haunting, very strongly performed and subtle, but unlikely to change his fortunes. The public were clearly not interested in more of the same.

The flipside here is more interesting, being a church organ led piece of minimalism which sounds almost post-rock in its ambitions - slow, atmospheric and lingering like a low, druggy mist. It's possible that if Cordell had written more material of this ilk and sprawled it across an LP, he may have an underground hit of sorts.


As things stood, Phil Cordell eventually went off to sign as a solo artist to the Motown subsidiary Mo West, briefly stopping off to issue another single on Rare Earth as Dan the Banjo Man. In fact, he littered the seventies with singles, none of which really repeated the success of "I Will Return".

Despite this, his career is an enviable and varied one. His early work with Tuesday's Children and the track "Red Lady" are particularly worthy of exploration if you're not familiar with them already.

Sadly, he passed away in 2007, leaving behind three children.

If the previews below aren't working, please access the files directly here.