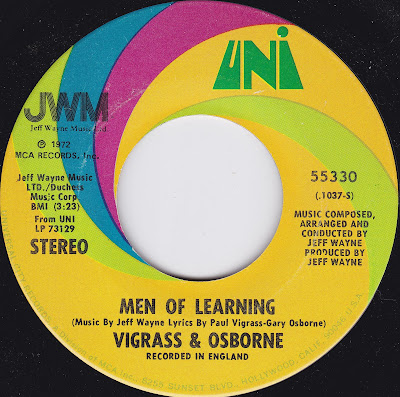 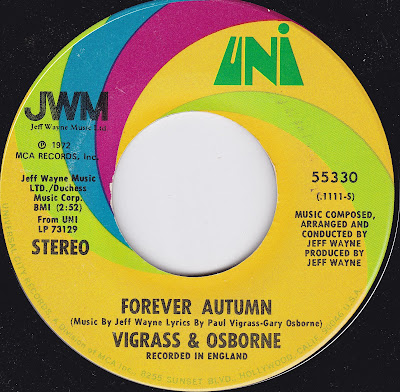 A Lego advert with some lyrics put to it, or "War of the Worlds"?

As someone who hasn't necessarily been a keen student of all things Jeff Wayne, it took blogger (and ex-Green and ex-London Assembly politician) Darren Johnson to bring this one to my attention.

Vigrass & Osborne were a slightly folky harmony pop duo who came under Jeff Wayne's charge for one LP in 1972. Gary Osborne had previously been a member of the UK (rather than US) Chocolate Watch Band who issued two singles on Decca in 1967, one of them being the highly sought-after "Requiem". Paul Vigrass, on the other hand, had served time as a solo artist on RCA as well as briefly delivering lead vocals for a post-Tony Burrows line-up of Edison Lighthouse.

Their debut album "Queues" was a collaborative effort with Wayne, with him providing the music and the duo providing lyrics for all the tracks. Despite being a contemplative and highly melodic album, it didn't achieve a lot of attention at the time, and despite occasional reissues around the world appears to have drifted off-catalogue once again.

That's surprising when you consider that one of the key tracks from Jeff Wayne's "War of the Worlds" project was already hiding away both on the LP, and on the B-side to the second single from it. "Forever Autumn" is, in this guise, slightly choppier and breezier than the eventual Justin Hayward version, clipping along like a song whisked through a gale, which was surely the intention. Droning synths and fluttering flutes rush past the song's post-romance angst, and for me, it's actually a more effective and evocative version, appropriately summing up the turmoil and confusion of a relationship's end. There again, it was the first version, and therefore had every right to be better.


Or was it actually the tune's debut? The fact is that the melody for "Forever Autumn" had already been used in a Lego advert some years before, with the top melody line represented by a series of ponderous, unfinished "doo doo doo" vocalisations, doubtless meant to represent the free-flowing and random creativity that comes with a box of Lego. Having been given access to the tune, Vigrass & Osborne decided to take it to the next level, clearly hearing a deeply melodramatic number where Wayne originally heard a children's advert. Sometimes the development of songs takes them to places even the creator never originally imagined.

Once again, this is another example of a single having a truly perplexing A-side. "Men Of Learning" is a perfectly fine composition and an early example of environmental protest, with Vigrass and Osborne pleading for the "men of learning" to step forward and stop the world from ecological destruction (they're trying their best chaps, so go easy - but here and now in 2020, they're being drowned out on all sides by business concerns and contrarian basement dwellers swallowing oil company propaganda and believing themselves to be uniquely clever while doing so). It's not better than "Forever Autumn" by any stretch, though, and it's fairly clear that Jeff Wayne's attitude to this song was somewhat dismissive initially - casting it off to an advert one moment, then a flipside the next.

There's little doubt that he did eventually realise its value, though - he only came to use the old track in "War of the Worlds" when he tried to write a song like "Forever Autumn" especially for the LP, before eventually deciding just to use the original track instead, presumably figuring that barely anybody would notice. Fair enough, lad.

After "Queues", the pair moved on from Jeff Wayne and released their self-penned second LP "Steppin' Out" on CBS in 1974. When this also flopped, Paul Vigrass moved on to the eighties group Quasar. Osborne's future endeavours are less well documented.

Thank you for this, I never realized there was a previous version of 'Forever Autumn'. I still prefer the closing of the JWWotW version though.