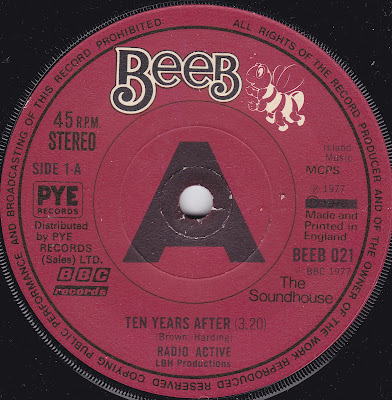 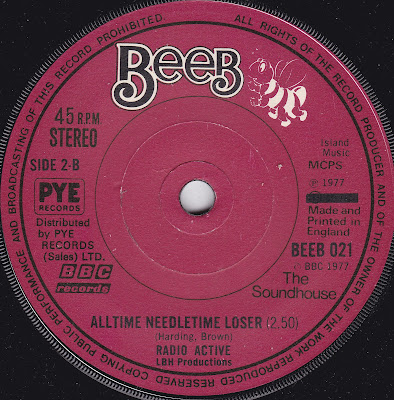 BBC Records and Tapes is a label with an absurd and fascinating history, and the singles that worked their way on to both the parent label and its Beeb imprint have been fully explained and catalogued in Tim Worthington's brilliant book "Top of the Box". It's a lovingly compiled tome which brings sense to what might otherwise seem utterly mysterious - so many of these released themes are for television series which have long since been forgotten, or in one case, never even aired.

While you don't need to have his attention to detail to immediately understand what this record is about - the clue is in the title, the release date, and Radio 1's launch - he does inform us that this was recorded by a band of BBC studio staff, including Radio 1 producers Malcolm Brown on guitar and Mike Harding on keyboards, with BBC Radiophonic Workshop's Paddy Kingsland on bass and assistant controller Bryant Marriott on drums.


The net result sounds rather like a piece of happy, catchy music which might have been perfectly serviceable as the theme to a documentary or a promotional jingle for the anniversary of the station, but was a slightly optimistic single release. Were the kids really going to rush out and buy a ditty about Radio 1 being ten years old then dance around their bedrooms to it in celebration? Auntie Beeb obviously thought so - lyrics like "With your top DJs and the toons they play" and "if you love us you must join us/ raise your glass and say cheers" litter the disc, but it sounds more like the kind of thing you'd find on a High Street bank's freebie flexidisc than a record most people would be willing to shell out money for. I've no criticism of the production or even the songwriting here, which serves its purpose, but it's not a chartbound sound.

Fear not, though, for nestling on the flip is an unexpected quickie punk parody which John Peel managed to get his hands on and plug on his show rather enthusiastically. "All Time Needletime Loser" leans more towards Eddie and the Hots Rods styled pub rock than pure punk, to be honest, but is still surprisingly raucous, with all concerned clearly showing an aptitude for the form. It proved that while Radio 1 took tentative, nervous, circling steps around punk like a cat casing out a potential threat, they had staff who understood where it was coming from, and were old enough to remember the more caustic sounds of The Who, The Kinks and The Stones and reappropriate them accordingly.


Side A might approach the warm and cosy tones of the middle of the road in places, but this single showed that the BBC's musical staff could turn their hands to just about anything. It's no wonder the organisation were, for a brief period, keen to bring the abilities of their in-house composers and performers under the spotlight.

Having trouble accessing that B side. Could you take a look ?

Afraid I don't, Dave, and nor have I ever seen a copy for sale. I do keep an eye open for Howard Blaikley penned stuff, but I suspect if a copy turns up it will be too pricey for me.

Decent B-side and I agree, not the sort of tune you'd expect on a BBC single.

Sorry to be lazy, but what was the unaired series and its accompanying single?