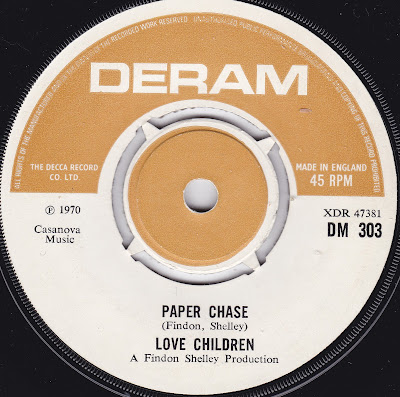 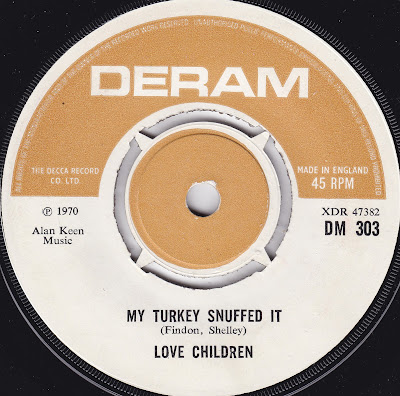 A great yet late arrival to the psychedelic harmony pop fayre

The songwriter Peter Shelley - not to be confused with the recently deceased Pete Shelley of The Buzzcocks - was all over the seventies charts like a rash. He wrote hits not just for himself but also Alvin Stardust, and was also the co-founder of Magnet Records, home to the aforementioned Mr Stardust and also Darts, Chris Rea, Silver Convention and Guys 'n' Dolls.

His career in the music business was slightly lower-key prior to his first huge hit, however, and he focused most of his time as an independent writer and producer, working with Ben Findon to turn out a number of solid pop sides that were nonetheless largely ignored.

Love Children's "Paper Chase" is probably one of the most famous examples to collectors of psychedelic compilations. The long unavailable "Great British Psychedelic Trip" series found space for it on Volume 4, where its irrepressible cheerfulness sat neatly alongside some of the heavier pieces of psychedelia on offer.

Therein, I suspect, lies the reason this single wasn't a hit. Really, 1970 was a little bit too late in the day to drop both sitar intros and buoyant West Coast styled harmony vocals into any record's mix, and perhaps with a little bit of rearranging Shelley might have been able to turn this track into something a bit more radio friendly. Had he done that, though, we'd have been denied what is actually a truly swinging piece of late popsike - this is music to go running in the park to while throwing flowers to the cider drinkers and frisbees back in the direction of children. If you're not trying to do star-jumps in the living room halfway through the second chorus on this one, then you may be a lost cause.


The B-side is a neat, undersung little effort as well, clearly having been recorded as a throwaway but having a compelling groove to it nonetheless.

"And what about the group?" you might ask yourselves. That's where things inevitably get vague. They had three singles out across three summers - "Easy Squeezy" in 1969, "Paper Chase" in 1970 (both on Deram) and "What Are You Doing Sunday" on the small independent label Reflection in 1971. I had always assumed they were some kind of Shelley/Findon studio group specifically geared around summer hits, but it would appear that they might have been a proper going concern, consisting of Morgan Kent (later signed to Spark), Hamilton Hawksworth (these days largely a library music composer), Pete Roberts and someone known only as Gavin - can anyone confirm this?

Whatever the hard facts are, this single acts as a strong hint towards Shelley's future success as a songwriter, as well as being an arguable late entry into the psychedelic pop canon.

I really like this, it sounds so familiar. I wonder if it picked up airplay. Thank you for sharing. Its already going round in my head, so catchy.

It's certainly much less obscure than a lot of the stuff that ends up on this blog - it was on a cultishly popular psychedelic compilation and seriously did the rounds on a lot of C90 psychedelic cassettes people made for me in the nineties.

It definitely wasn't even close to being a hit in 1970, but I'm sure it's been played on a few late-night radio shows in its time, even relatively recently.

I can confirm Peter Roberts was with the love children prior to this he played in the honey combs for a while . I played in a band with him in the late 90s based out of Bicester in Oxfordshire ( known as the six five special )he was a publican in the town and we covered all of the Love children songs as well as the Honeycombs .Peter moved to Suffolk and took up Taxi driving as well as another pub but sadly died a few years ago of Pancreatic cancer. Peter had a tremendous voice and was a charismatic performer and good guitar player who should have been a major star .