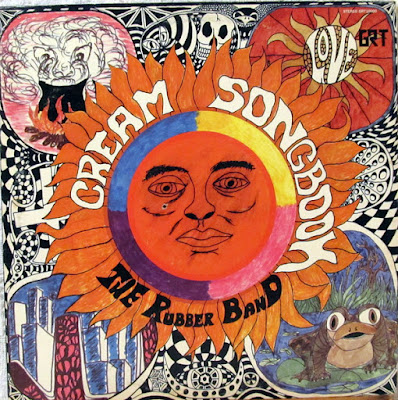 Regular readers will probably remember that back in December, I uploaded The Rubber Band's "Jimi Hendrix Songbook" for everyone's enjoyment - an instrumental tribute LP which included richly arranged and occasionally intriguing versions of the tongue-wiggling wonder's top tunes.

There was a long series of these LPs, and reader Arthur Van Daele very kindly got in touch sending me mp3s of the others, which I then stashed to one side for a convenient moment. The Cream LP still seems to have the heavy involvement of Michael Lloyd, who largely led on the Hendrix project. This time round, though, there are no uncredited 'celebrity' drop-ins from the likes of Warren Zevon, though I'm happy to be corrected if I'm wrong.

What you get is some thunderous orchestral takes on Cream's songbook, which don't take as many liberties with the original tracks as the Hendrix LP, though the puffing flutes and zinging harpsichords on "Sunshine Of Your Love" (mp3 sample available below) are somewhat unexpected, as is that track's hysterical ending.

At its worst, the LP reduces the group's output to dinner party muzak. At its best it has an apparent spirit of adventure and probably isn't taking itself too seriously into the bargain. A perfect noise for that sophisticated Cuban cigar smoking session you had arranged with your hairiest friends - don't forget to buy some Port too - and probably a few other situations besides.

Thanks again to loyal blog reader Arthur for providing me with these files.